LAWRENCE — Laura Hobson Herlihy is a big fish in a small pond. A lecturer in Latin American & Caribbean Studies, Herlihy is one of a small number of North Americans who speak, and an even smaller number who teach, the language of the indigenous Central American Miskitu people.

Through her work with the Miskitu in Nicaragua, Herlihy has become the star of a thrice-weekly radio show in the region and the writer and impresario of a Miskitu operetta that drew 5,000 people to a performance on the beach in Puerto Cabezas over the Easter weekend. It was such a hit she’s been invited back by the municipal government to stage it again in June in Nicaragua. 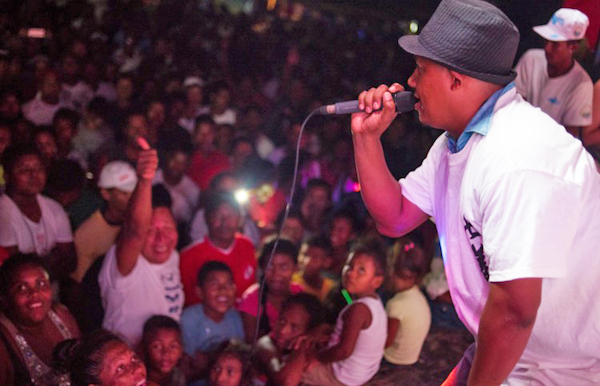 The operetta is titled “Green Man, Blue Woman” and involves themes of politics, romance and voodoo. It’s a fictionalized story based on Herlihy’s real-life working relationship with Brooklyn Rivera, the political leader of the Nicaraguan Miskitu.

It all started as an exercise in learning and teaching the Miskitu language.

Herlihy first learned Miskitu back in the 1990s, while accompanying her husband, KU Professor of Geography and Atmospheric Science Peter Herlihy, as he did field work in Honduras.

There are about 200,000 Miskitu in Honduras and Nicaragua, plus members of an additional seven or eight ethnic groups who speak and understand the language.

“It was necessary for me to learn, because I was staying behind in the villages, working with women who didn’t speak Spanish,” Laura Herlihy said. “As an anthropologist, you get better data. You find concepts that don’t translate. Then you know you’re on to something.”

She lived in Nicaragua in 2004 and taught at a university for indigenous students there, becoming acquainted with the political leader of the Miskitu, Brooklyn Rivera. Herlihy said the Miskitu tend to have anti-Spanish-colonial feelings and are thus pro-Anglophone. That was partly why they, including Rivera, became a significant part of the U.S.-led anti-Sandinista Contra movement in the 1980s. With the end of the armed conflict in 1987, Rivera became director of the indigenous organization YATAMA, an acronym for Yapti Tasba Masraka Nanih Aslatakanka — literally "Sons of Mother Earth.” YATAMA later became a political party. In 2006, Rivera became an elected congressman in the Nicaraguan National Assembly, where he remains today.

“I really tapped into something when I wrote about their leader. They are obsessed with him,” Herlihy said. “He’s like a god; like Elvis Presley. I interviewed him, and so we were texting back and forth about his schedule. And every year when I would direct a KU Study Abroad, they’d give me back the same cell phone, and I’d save the messages.

“So the play started because I wanted to save my text messages, and our words back and forth turned into poems. As an anthropologist, you write at night about your interactions during the day, and I got the idea to fictionalize it."

The story line is like a cross between ‘The King and I’ and ‘Harry Potter,’” Herlihy said.

“There is an Indian leader and an anthropologist," she said. "He puts a potion on her and makes her a blind follower of the Miskitu people. She falls in love with the Miskitu people, and the leader Rivera is their gatekeeper. He represents the green party, so he’s the Green Man.

“Then another faction doesn’t like the support she’s giving him, so they kidnap her and take her to a shaman to cut the spell Rivera’s put on her. The shaman bathes her in a counter-remedy potion, and it’s the color blue, making her the Blue Woman. That’s how it sets up the rest of the story, which is the relationship between the leader and the gringa. It touches on real historic events. It’s set in the recent past.” 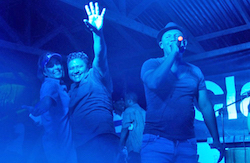 Herlihy said she began writing the poems as exercises in the use of the Miskitu language for students, as well as for herself.

“There are few forms of written language or literature,” she said. “There are some longer folktales published, but Miskitu songs are basically poems made up of short sentences. This is at the intermediate level, so it can get students to that next step. One of the best ways people learned Miskitu was from the Bible, which has the same types of short sentences. The Moravian missionaries translated the Bible. But no one wants to read the Bible.”

The project has seemed to take on a life of its own, being translated first into a radio show on YATAMAS’s station two years ago and then into the Miskitu pop-operetta. Herlihy said she has arranged with top local musicians to set her writings to music. She calls in to the radio station to participate with local hosts.

“It became really popular,” she said. “They’d never had this genre that tells a story before. We play a song, and I explain it. They love that a gringa speaks their language.”

In addition to the GoFundMe account she has set up to support her artistic endeavors, Herlihy got an Open Educational Resources grant from KU Libraries to work on the operetta that was staged in April.

There were two performances: The first show before a small crowd in a club served as a rehearsal for the much larger crowd that came to the beach on Easter Sunday. Puerto Cabezas’ government paid for the stage, lights, sound and security. Even a 45-minute rain shower that delayed the performance halfway through didn’t diminish the crowd, Herlihy said.

“I’ve been invited back on Mother’s Day, which is May 30th there,” she said. “They said it was the most popular concert ever. There were so many of their best musicians, and people wanted to see who Mairin Blu (i.e., the Blue Lady) was.”

Herlihy described the performance as sort of a radio play for the stage, with the explication all in song. Although there was some costuming, there is no spoken dialogue or blocked action among the actors. Turning it into a full-blown musical play would be the next logical step, she said.

“2019 is the international year of indigenous languages at the United Nations Permanent Forum on Indigenous Issues, and I’ve got my eye on that,” she said.