LAWRENCE — The fate of stingless bees in Brazil is so important that University of Kansas researcher Chris Brown risked life and limb to survey the vital pollinators in the state of Rondônia, which borders Bolivia in the southwestern Amazon. 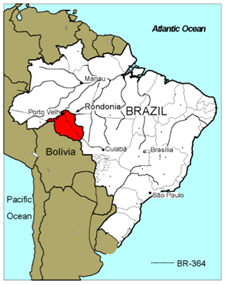 “We sampled in areas where large landholders were in conflict with landless peasants,” recalled Brown, an associate professor of environmental studies and geography at KU. “That was a bit scary when there we were with our nets, and a pickup drove by with a gunman in the back. We surveyed in some of the most remote parts of the state, in national parks, and saw truck after truck hauling huge mahogany trees to sawmills, much of it illegal. Nearly everywhere we went, we had to convince locals that we weren’t government agents or gold prospectors. We took some of the bees we caught and talked to people about them. Then, they were happy to have us on their land collecting.”

Native to the tropics, stingless bees are cousins of honeybees. They are highly social, living in colonies, with queens and workers, where they store honey and pollen for food. Stingless bees evolved before the breakup of the ancient continent of Gondwana, some 150 million years ago, prior to the appearance of honeybees. Each species make their nests in a variety of cavities, like in old termite nests, the ground and living trees. 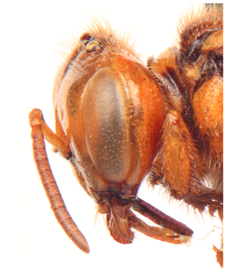 “Stingless bees play an important pollination role in forest and agricultural ecosystems in the tropics,” said Brown. “Without pollinators, many plants, including plants we depend on, don't reproduce well. Any chance to protect pollinators is a chance to secure our own human survival. Bees around the world provide us with this essential environmental service.”

Over the course of a year, at 187 sample sites, Brown and his colleagues found 9,555 individuals representing 98 species of stingless bees. Ten of those species were entirely new to science.

“But these bees have long been known and used by native peoples throughout the tropics,” Brown said. “When we find a new species, we are simply scientifically identifying it.”

Alas, deforestation, agriculture and other forms of habitat destruction threaten stingless bees in Rondônia, the region where they display their richest recorded diversity.

“These bees are forest species,” said Brown. “They survive best in that environment. Take the bees that nest only in the cavities of live trees . . . remove the trees, and there is just no place to live. Take away pollinators, and you take away an essential environmental service that we need for our very survival.”

The KU researcher said the new research builds on a survey conducted in 1996. At that time, there already were highly deforested areas that had been settled by farmers from Brazil’s south, in addition to heavily forested areas.

“The deforestation we saw was caused by clearing land for farms and ranches, and there was lots of logging,” Brown said. “Sustainable development projects have been implemented in the region among farmers, indigenous and other peasant groups to stop deforestation, but unfortunately for the bees, ranching and farming have continued to gain ground.”

Brown’s collaborators included the late Professor João Camargo, who led the identification of specimens and naming new species. Brown’s co-author, Marcio Oliveira, is from the National Institute of Amazonian Research, and he was a post-doctoral scholar in geography at KU in 2010. The World Bank supported the research as part of the socioeconomic-ecological zoning of Rondônia.